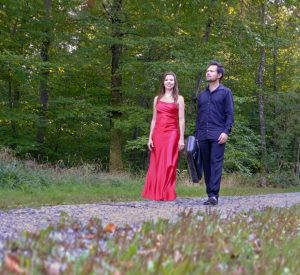 “…from the first note until the final chord, Duo Froschhammer captivated the audience with the outstanding force of their technical skill and their natural musical instinct.” Neue Musikzeitung (NMZ)

The Duo Froschhammer features siblings Felix Froschhammer, violin, and Julia Froschhammer, piano. Founded in 1998, the Duo has since performed in Switzerland, Germany, Italy, France, Malta and at the famous Atheneum in Bucharest. Together they are prize winners of the International Wolfgang Jacobi Competition for 20th century chamber music and have been recipients of scholarships from the Bavarian Music Fund.

German violinist Felix Froschhammer captivates audiences with his wide-ranging performance skills. First Violinist of the casalQuartett and Concert Master of both the Ensemble Symphonique Neuchâtel and Sinfonietta de Lausanne (Switzerland), Felix is also active as a soloist and plays an important role in the Ensemble Chaarts and Tri i Dve, a Quintet specialising in Balkan music.

Born in Munich, Felix started studying the violin at the age of seven with Olga Voitova, making his orchestral debut at the age of ten with the Münchner Rundfunkorchester.  He then went on to study with Pierre Amoyal and Salvatore Accardo, graduating from the Haute école de musique de Lausanne (HEMU) with highest honours in 2007, and later receiving a special prize from the Sinfonietta de Lausanne for his professional achievements. Together with Amoyal and the Camerata de Lausanne Felix was soloist in the Vivaldi and Bach Double Concertos on several international tours and broadcasts.

Felix has recorded works for violin and cello on the label ArcoDiva and records regularly for the Solo Musica label with the casalQuartett. His most recent CDs have won prizes at Echo Klassik, the German Record Critics’ Awards and the Supersonic Awards.

Born in Munich, Julia Froschhammer began studying the piano at the age of six with her father, the pianist and composer Fritz Froschhammer. A prize winner of several national competitions, she obtained her artistic diploma with Vadim Suchanov at the Richard Strauss Conservatory, Munich, and joined the Haute école de musique de Lausanne (HEMU) in 2002, studying with Jean-François Antonioli. In 2007, she completed her studies with the prestigious soloist’s diploma and was awarded the Paderewski Prize and the Ganz Prize.

Julia performs regularly as a chamber musician and soloist throughout Europe. Together with harpist Céline Gay des Combes she also enjoys performing as part of the Duo Harpian, a rare harp and piano duo which can be heard on Radio France Musique, Radio Espace 2, SRF and Radio Classique. Recently they have performed for the Swiss Embassy in Washington (USA) and released a CD of French and Spanish music on the Swiss label VDE Gallo. The duo often commissions new works, and in 2016, the Swiss composer Jean Froidevaux dedicated a work to them. With her new ensemble, Pianofolie, Julia performs with three other pianists at one piano, combining music and comedy.

Alongside her concert career Julia shares her passion for music through teaching, notably as Professor of piano at the Institute de Ribaupierre (EML) in Lausanne. As an accomplished artist Julia also expresses herself through painting. Her work can be found on her online art gallery, JuArt, and at regular exhibitions and concerts combining music and art. Some of her Nordic paintings illustrate the booklet of this CD. 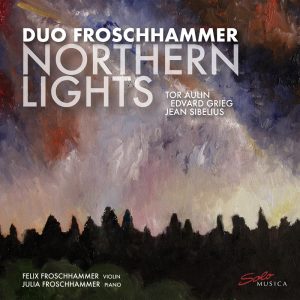