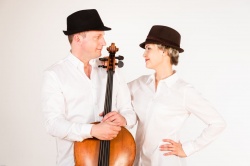 The Duo Arnicans comprises Florian Arnicans, whose roots are in Germany, and Arta Arnicane, who was born in Latvia. Each of them had a long and exciting period of training. They found each other through music and now live together in Zurich.

Arta Arnicane started to play the piano and compose at the age of four. Supported by numerous foundations, she studied for her master’s degree in Glasgow (2003) and Riga (2008), graduating with distinction in Zurich (2010 and 2012). She received wide-ranging support from professors Sergejs Osokins, Norma Fischer and Homero Francesch, who guided her artistic development and entrée to the international music and competition scene. Arta has won prizes at numerous international competitions, including Vianna da Motta (2001), Premio Iturbi (2010) and Prague Spring Festival (2011).
Arta performs a wide-ranging repertoire of solo and chamber works. She particularly likes playing Ravel’s solo piano works and Mozart’s piano concertos. Since 2010 Arta has regularly performed in concerts with John Gibbons, conductor and head of the British Music Society, and Martin Lebel, principal conductor of the Karlovy Vary Symphony Orchestra.

Florian Arnicans’s musical journey began in Namibia, where he had his first cello lessons at the age of five and discovered his love and calling for music. After briefly attending the musical high school at Belvedere Palace in Weimar, the highly talented Florian began studying in the class of Prof. Böhme at the Franz Liszt College of Music in Weimar at the age of seventeen. After completing his degree with Prof. Johannes Goritzki at the Robert Schumann College of Music in Düsseldorf, he attended the soloists’ class of Prof. Patrick Demenga at the Conservatoire de Lausanne in Switzerland. He was then awarded the Max Jost-Preis for obtaining his soloist’s diploma with distinction, and went on to study for his master’s diploma in chamber music with the renowned Guarneri Trio Prague, passing with distinction in Lucerne.
Florian is at present much in demand as a soloist and chamber musician, and has performed with renowned orchestras and at music festivals like the Lake Constance Festival (2013), the Bregenz Festival (2013) and the London Proms (2014).

Forming the Duo Arnicans with Arta in April 2013 represented a very important step in Florian’s musical and personal development. The Duo has performed in numerous concerts and recitals at home and abroad. The first international concert tour took place in the autumn of 2014, when they had great success in Scotland, England (London) and Latvia (Riga).

The debut album of Duo Arnicans presents an emotionally charged programme reflecting the personalities of the two artists. The Chopin waltz on this CD has special meaning for Florian and his wife. Arranged by Arta for cello and piano, it was performed by close female friends as the couple’s personal wedding waltz in August 2014. 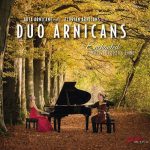 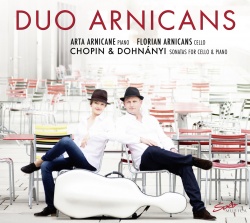