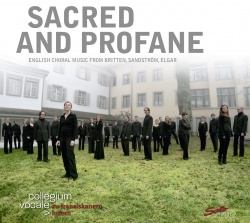 Benjamin Britten (1913-1976), the creator of the epic War Requiem, is rightly regarded as the most important English composer of the 20th century. His works for a cappella choir show an overwhelming variety of styles, texts, and compositional techniques. And for these, choirs are extremely grateful. Benjamin Britten, who was known not only as a composer but also as an experienced practitioner, was able to precisely gauge the possibilities of each respective performer; he knew exactly which details in the score were necessary to achieve the desired effect.  Excellent choral music is to be found in settings ranging from children’s and school choirs to oratorio choirs and professional ensembles. The choices made for this recording – major works from different creative phases throughout Britten’s life – reflect this diversity. The inclusion of works by William Byrd, Henry Purcell, Edward Elgar, and Ralph Vaughan Williams also affords an opportunity to trace a line of tradition in English choral music.

The Collegium Vocale was founded in 2005 by Ulrike Grosch. Originally made up of participants of a workshop led by Ton Koopman, the choir consists primarily of students and alumni of Swiss conservatories and music schools. The choir and its director share an enthusiasm for the discovery of the new, combined with high vocal expertise and a particular passion for working on language, diction and sound.