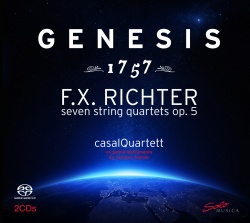 An ominous foreboding, blood in the snow, a corpse in winter …
These is the story of a tragic incident which took place near the court of the Duke of Hildburghausen in 1757, and forms part of the unusual credentials of a man who avoided a fatal end only by a hair’s breadth because he chose to play string quartets. In his memoirs, the violinist and composer Carl Ditters von Dittersdorf recalls refusing an invitation to take a ride in a horse-drawn sleigh due to a premonition. As a consequence, while Dittersdorf was playing first violin with his brothers in the court orchestra, a young man sitting next to the coachman on the sleigh ride was killed due to reckless driving. Stimulated with high-quality coffee and indulging in the finest tobacco, Dittersdorf named the celebrated composer of that era whose works they were playing that evening: Franz Xaver Richter, the Mannheim master of counterpoint and a composer of the most exquisite chamber music and symphonies.

Recent research by musicologists shows it is safe to assume that those works were very likely the seven quartets of opus 5, which are now to be released for the first time in a complete recording on the SOLO MUSICA label. Two exceptional CDs have been compiled, in cooperation with the SWR broadcasting company, featuring the casalQuartett from Zurich, an ensemble that won an ECHO Klassik award in 2010. As was the case on their previous two “BIRTH of the STRING QUARTET” CDs, this release features some almost unknown examples of stunningly beautiful string quartets played on four unique instruments by Jacobus Stainer, one of the most-sought-after European violin-makers of the 18th century. This release represents a milestone in the string literature, bringing to life works written 250 years ago, and it makes the case for a well-earned revival of one of the founding fathers of the string quartet.