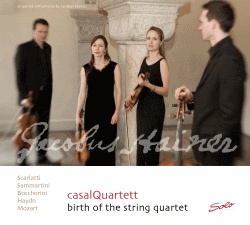 Title: Birth of the String Quartet

The Jubilee Year 2009 celebrates Joseph Haydn as the most important representatives of the Viennese classics in addition to Mozart. Among its greatest achievements is undoubtedly the “invention” of the string quartet. While typically each student begins with this fascinating genre by Haydn, illuminates the casal quartet with the project “The sound of the 18th century,” the various ways to the creation of the European String Quartet. In Italy, France and Germany, four-part instrumental in the 1 Half of the 18th Century are more and more important. In the first CD of the quartet casal on this issue comes next to the masters of the early classical GF Telemann most outstanding protagonists of Italian gets a chance to speak: JB. Sammartini and Alessandro Scarlatti are preparing, which eventually flows amazingly modern with Luigi Boccherini’s String Quartet in real. Another early milestone of the genre is the Quartet, K. 170 by W.A. Mozart, recorded here also for this CD. For the goal of the development end of the 18th century is finally Haydn’s String Quartet in G major, Op 76 / 1. For these recordings the quartet casal where supplied with a complete set of unique instruments of the Austrian violin-maker Jacob Stainer from the years around 1650. Their sound was considered until the early 19th century as an absolute Ideal.

Awarded with the Echo Klassic 2010