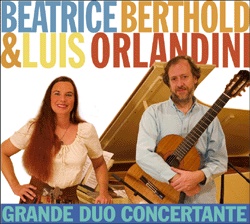 The guitar is one of the oldest and, in all its various forms, one of the most ubiquitous of instruments. The special interest it awakened in the fi rst half of the nineteenth century coincided with the transition in the late eighteenth century from the earlier four- and fi vecourse forms (i.e. with four or fi ve pairs of strings) to the standard six-string form we know today, which has a more voluminous tone and enables more wide-ranging use as a solo instrument, in accompanying the voice and in chamber music. Although the guitar was at home in Spain, it was also common and popular in Italy, France (Paris), Germany, Austria (Vienna), England and Russia. A succession of important guitarists wrote pioneering guitar methods and studies and compositions for the salon and the concert hall.

Beatrice Berthold has pursued a busy concert career which led her to several countries of Europe, South America and to the USA. She has performed with the radio symphony orchestras of Hamburg (NDR), Cologne (WDR), Luxemburg and Prague and with the Berlin Symphony Orchestra (BSO), Stuttgart Philharmonic Orchestra, Philharmonic Orchestra ‘Arthur Rubinstein’ Lodz, Orquestra Sinfonica de Porto Alegre, Orquesta ‘Gran Mariscal de Ayscucho’ Caracas, etc. Luis Orlandini has premiered more than 50 works by Chilean composers, some of them commissioned by him. His publications include a guitar music series featuring contemporary Chilean composers. He has received several high awards in his home country. In addition to his busy international concert schedule, Luis Orlandini is professor for the guitar and chamber music at the Universidad de Chile and at the Pontifi cia Universidad Católica de Chile, and adjudicates at many international guitar competitions.