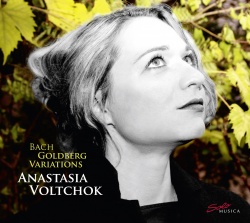 When she recorded Bach’s great set of variations in Basel’s Hans Huber Hall, Anastasia Voltchok was keen to play right through the work only twice on one and the same day. A high degree of concentration and vital energy are the preconditions for such a bold undertaking, to say nothing of the most thorough preparation and years of experience on the concert podium. The advantages of avoiding short takes are self-evident: constant tension over long stretches and organic transitions from one variation to the next in terms of tempo, dynamics and continuity of expression. She prefers to avoid long pauses between the groups of variations, though she feels that it is advisable to take time to catch her breath before the start of the second half of the work (from Var. 16, marked “Ouverture”). Time and again the multi-awardwinning Moscow-born pianist engaged with this demanding set of variations, practising them intensely and finally playing them repeatedly in the concert hall. She believes it is vital to have studied as many of Bach’s works as possible prior to such an involvement. Above all, The Well-Tempered Clavier and the Partitas helped to open up this world to her. Bach has already written out the ornaments in detail and she has no wish to try to outdo the composer by improvising additional ornaments of her own. Nor does she regard it as indispensably necessary to observe all of the repeats. Anastasia Voltchok, who studied with Evgeny Malinin and Larissa Dedova in Moscow, with Rudolf Buchbinder in Basel and with Santiago Rodriguez in Maryland and who has now chosen to live in Switzerland, prefers to allow herself to be guided by the spirit of the moment. Of course, the repeat is essential in Var. 25, this extended minor-key threnody that explores rarely plumbed depths of anguish. But do we not find humour – quite unexpectedly – in the famous Quodlibet of Var. 30? No, argues Anastasia Voltchok, it is not humour that occurs here but a lovingly fashioned high point of the work to which all that has gone before it has been ineluctably leading. The Aria that is then heard once again is like someone returning home after a long absence.