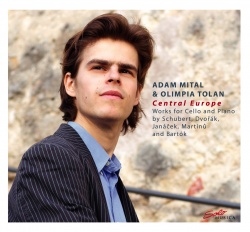 This recording presents Schubert’s famous Arpeggione Sonata, together with several other works by Central European composers. The theme “Central Europe” thus threads right through. Why did I select this programme? Aside from my love for the works of Franz Schubert, I am particularly attracted by the music of central and eastern Europe.
Dvorák, Janácek, Martinu and Bartók composed a whole series of works for cello and piano. Fascinated by their tonal language, which was greatly influenced by the folk songs of their respective countries, I have long cherished the idea of recording these works.
The relationship of Schubert’s music to the works of these composers from the neighbouring countries is interesting in many respects. Apart from Prague and Budapest, Schubert’s city of Vienna is both geographically and culturally one of the important cultural centres of central Europe and Schubert’s work undoubtedly influenced the other composers. The programmatic transition from Schubert to Dvorák and then Janácek is of special interest, above all as far as the poetic statement of their works is concerned. Dvorák and Martinu represent Bohemia, Janácek Moravia and Bartók Hungary.This present recording therefore takes the listener on a journey through eastern Central Europe, from Vienna via Bohemia, Moravia and Slovakia to Transylvania.For me personally it also represents a review of the many years of musical collaboration with my wife Olimpia Tolan, for which I am immensely grateful.Adam Mital