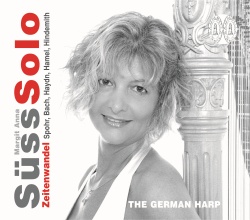 Renowned solo harpist Margit-Anna Süß, a native of Munich, who also appeared as a guest harpist with the Berlin- and Bamberg Symphonic Orchestras, describes a journey through musical eras on her new CD “Zeitenwandel” (lit.: Change of Times), which is a co-production with the ‘Bayerischer Rundfunk’.

Ms. Süß explains: “I would love to show what music intended to express in different eras and how this can be translated into harp-playing. I deliberately dropped any chronological order as to offer the listener more contrast. These are not exclusively original oeuvres as I am really interested in valuable compositional literature. There is a certain tendency nowadays to record single ‘movements’ instead of complete sonatas or oeuvres – so to speak, chocolate candies of a distinct flavour which are sized-down for easy instead of attentive listening thus creating a pleasant mood for the listener – almost like background muzak in a supermarket.”

Her recordings of wonderful oeuvres by Bach, Haydn, Hamel and Hindemith prove how excellently she carried out her ambitious project.