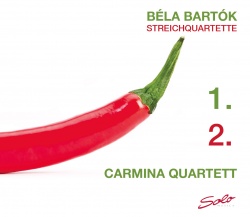 The string quartet occupies an important place in Bartók’s oeuvre; the six quartets illustrate his characteristic musical style. As with Beethoven, each quartet seems to epitomize its respective creative period.
What makes the first of Bartók’s six quartets so special is its direct connection to the late romantic period, which does not detract from the fact that he has already reached a very unique and personal style. The second quartet seems to seamlessly continue where Bartókleft off with the first quartet, even though nearly 10 years lie between the two compositions.
Bartók’s string quartets op. 7 and 17 are milestones of his musical evolution. His roots in the late romantic era as well as the all-important integration of folk music into his compositional style are central to both works. For the Carmina Quartet, these two quartets cannot simply be reduced to way stations in the development of Bartók’s musical language – they are masterpieces in their own right, with their poignant melancholy allure.
Intensity of expression, effortless perfection, and stylistic integrity are the hallmarks of the Carmina Quartet, founded in Switzerland in 1984. Spectacular success in string quartet competitions and headlines in the international press have paved the way for appearances worldwide. „Destined for greatness“ (Financial Times), the Carmina Quartet is now ranked among the leading quartets of our time. The Quartet has recorded a critically acclaimed series of CDs which have received numerous awards, including a Gramophone Award, Diapason d‘Or, Choc, Deutsche Schallplatten Preis, and a nomination for a Grammy.