One of the most exciting young artists to emerge in recent years, Martina Filjak is garnering international praise for her poetic passion and technical mastery at the keyboard as well as for her charismatic personality and magnetic stage presence.

In recent years, Ms Filjak has performed with esteemed orchestras including The Cleveland Orchestra, San Diego Symphony Orchestra, The Florida Orchestra, the Strasbourg Philharmonic, Barcelona Symphony, Bilbao Symphony and the Granada Symphony; the Deutsche Radio Philharmonie, the Staatskapelle Weimar; the Israel Chamber Orchestra as well as the Orchestre Symphonique de Nancy. She has been heard in major international venues such as the Concertgebouw Amsterdam, Konzerthaus Berlin, l’Auditori and Palau de la Música Catalana in Barcelona, Zankel Hall at Carnegie Hall in New York, Boston’s Jordan Hall, Teatro San Carlo in Naples, Sala Verdi in Milan, Salle Gaveau in Paris, Musikverein and the Konzerthaus in Vienna, NDR Hall in Hannover, Residenz in Munich, Auditorio Nacional in Madrid.

Her most recent conductor collaborations include JoAnn Falletta, Michael Schonwandt, Christoph Poppen, Hans Graf, Sebastian Lang–Lessing, Josep Caballe-Domenech, Tito Munoz, Christopher Warren-Green and Stefan Sanderling.
The artist’s extensive repertoire ranges from Bach to Berio and encompasses more than 30 piano concertos. She is dedicated to continuous exploring of piano literature and various concert formats. Performing with orchestra takes the biggest part of her time and she frequently states that she enjoys the interaction and the exchange of energy between so many musicians on the stage.

An avid chamber musician, she frequently takes part in chamber music festivals, and has participated in the recording of Schumann’s Andante and Variations with cellists Jan Vogler and Christian Poltera, released on Sony Classical (August 2013). Her recording of Sonatas by Padre Antonio Soler was released in 2011 on the Naxos label.

Martina speaks seven languages. Fortunately, for an active performer, she loves to travel. 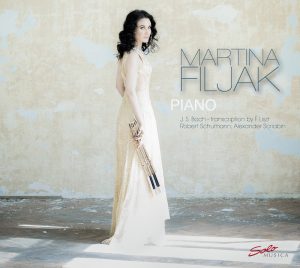