Born in Winterthur in 1988, the young Swiss musician Christian Erny has a diversified musical background.

He entered the Conservatory of Winterthur at the age of six and received instruction in the piano, choral singing and pop music. After passing his school-leaving examination at the Rychenberg Canton School in 2007, he continued his musical studies in the piano class of Hans-Jürg Strub at the Zurich University of the Arts, where he received a Master’s degree in music education, and in the concert class of Jean-Louis Haguenauer at the renowned Jacobs School of Music in Bloomington (Performer Diploma). He went on to gather valuable experience by working intensively with Leif Ove Andsnes and Eldar Nebolsin at the Piano Academy in Bergen. Erny was also awarded a Certificate of Advanced Studies in conducting after studying with Markus Utz and Beat Schäfer at the Zurich University of the Arts.

Erny began performing extensively on the piano while he was studying and to date has given solo and lieder recitals in Switzerland, Germany, the USA, France and Norway. He has been heard live several times on Radio Swiss. The Hirschmann Foundation granted him a scholarship for the best master’s project of 2013; at the International Piano Competition Île-de-Francein 2015, he won a prize for the best interpretation of a work by Arnold Schoenberg.

Erny began directing choirs early in his studies, quickly accumulating important experience as a conductor. Today he heads The Zurich Chamber Singers, the professional vocal ensemble he founded, and he also assists with the Winterthur Conservatory Chamber Choir.

His teaching activities likewise reach back to his student years. In the summer of 2011 he signed a three-year contract to give piano instruction at the Winterthur Conservatory. Erny has been in charge of a piano class at the Teachers College and Gymnasium Kreuzlingen since 2015. 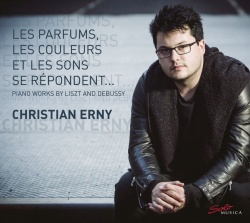