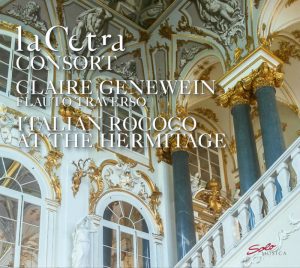 Title: Italian Rococo at The Hermitage

In the 18th and 19th centuries, the Hermitage in St Petersburg not only housed famous art collections, which were made accessible to the public after the October Revolution, but also hosted glamorous musical events. Catherine the Great had the Hermitage Theatre built, which still stands to this day, and the operas that were magnificently staged there were central to courtly festivities.

The idea for this CD came in conjunction with Claire Genewein’s elevation to Doctor of Creative and Performing Arts at the University of Leiden in the Netherlands in June 2014. In her thesis, she showed that in 18th century Italy, instrumental music was rehearsed with the aid of textual reflections – a method which, over time, was almost completely lost and which is hardly practised today. This CD documents the tradition of the mutual interaction between vocal and instrumental music and makes this stimulating impetus audible.
La Cetra Consort consists of members of the La Cetra Baroque Orchestra Basel, who cultivate this genre within a smaller and more intimate setting. Claire Genewein works as a flautist in various ensembles such as La Cetra Baroque Orchestra Basel, L’Orfeo, Venice Baroque Orchestra, Il gusto barocco, L’Arcadia, and Ensemble Miroir.