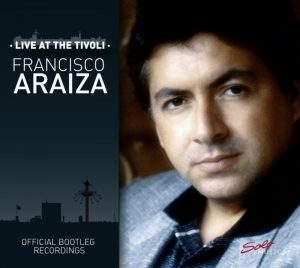 Title: Live at the Tivoli – Official Bootleg Recordings – Digital only

“The Official Bootleg Recordings” unites the two legendary Tivoli concerts of the exceptional Tenor, Francisco Araiza, from 1985 and 1987, which were personally recorded in Copenhagen. At the height of his career, Francisco Araiza dared to present the incredible range of his enormous repertoire to the audience in one evening. Here the broad spectrum of the tenor is reflected with an incredible freshness and power. It was his personal concern that these recordings were finally made accessible to his fans. He himself designates these two evenings as his absolutely best performances at this time.In 1983 he became one of the leading representatives of the dramatic Italian, French and German repertoire with roles such as Edgardo, Alfredo, Duke of Mantua, Riccardo III, Don Alvaro, Don Carlo, Rodolfo, Pinkerton, Cavaradossi, Des Grieux, Faust, Hoffmann, Werther, Romeo, Don Jose and especially as a youthful hero in Wagner- and Straussgenre.