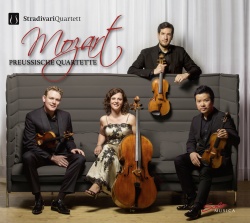 Mozart’s Prussian Quartets are not as Prussian as the title suggests. Despite assumptions about an explicit commission from the Prussian King Friedrich Wilhelm II, there is no evidence of this. The quartets were not even composed in Prussia. The Prussian Quartets are the last set of string quartets Mozart composed before his premature death. Although the set was planned to comprise six quartets, only three were published: K575 in D major, K589 in B flat major and K590 in F major. They were written in 1789 and 1790.

Since its debut in the Zurich Tonhalle in September 2007, the Stradivari Quartet has made a name for itself as an ensemble of great promise and become one of the leading Swiss string quartets. Some thirty performances a year take the Stradivari Quartet to venues all over the world. Highlights include appearances at the Wigmore Hall in London, the Metropolitan Museum in New York, the Kioi Hall in Tokyo, the Shanghai Oriental Hall and the National Center for Performing Arts in Beijing, as well as such prestigious events as the Lucerne Festival, the Bad Kissingen Summer Festival, the Rheingau Music Festival, the Rubinstein Piano Festival in Lódz, the Schleswig-Holstein Music Festival and the Stradivari Festival in Cremona.