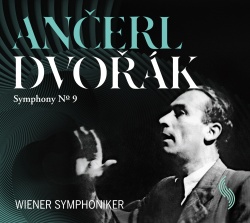 Vienna 1958: Karel Ančerl wasn’t simply promoting the nation as a model citizen of
Czechoslovakia, rather, wherever he was in the world, he spread his very own humanistic attitude. Yet he never forgot his Bohemian roots. He championed the unpopular oeuvre of Bohuslav Martinů in equal measure to being honoured for his sublime interpretations of works by Leoš Janaček. To this day, his recordings of the music of Antonin Dvořak stand as expressive testaments in sound to a hard-won identity.At the height of his post-war European career, Ančerl liked to visit his friends at the Wiener Symphoniker; not only for 23 concert performances with them by 1970, but above all to record, with them, the epitome of musical freedom. Thus Dvořak’s Ninth, the Symphony in e minor op. 95, really does sound like it comes From the New World. From a beautiful, new world that is proof of the universality of art, that is radiant in a belief in beauty, harmony and humanity. A radiance that could hardly travel more directly from the recording to the hearts of an uplifted audience. So it does exist after all in the world, something simply good …
Reporting on the premiere of the new symphony by the New York director Antonin Dvořak, the American press immediately called it a gift of true “American music”. Friend and musician Josef Jan Kovařik did in fact give an account of the completion of the score before the first performance on 16 December 1893 in New York’s Carnegie Hall, telling that, “before I set off with the score, at the last moment, the maestro [wrote] ‘From the New World’ on the title page.” Discussions both within America and internationally were, from the beginning, wide-ranging. Dvořak himself denied the intentionality of any possible ethnic associations, although he did indeed incorporate elements of Native American folklore –albeit enriched with song and dance tunes from his beloved Bohemian homeland.
Historical Recording – Recording location: Vienna, Musikverein – 8–10 February 1958