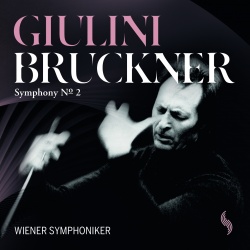 It is early 2014 and I am immersing myself once again in the c minor sounds of Anton Bruckner’s Second Symphony, which we recorded in December 1974 in the Golden Hall of the Vienna Musikverein with Carlo Maria Giulini. Listening to it, many images come to mind, including one that is not ostensibly musical. Just a few minutes into the rehearsal, the recording team from EMI Records moved the entire orchestra from the stage into the rapidly cleared stalls – for reasons of sound. This immediately touches on a crucial point: an optimal sound was what our then Chief Conductor was principally striving for. We had only four sessions for the recording of this Bruckner symphony, short rehearsals included. My thoughts wander from this relocation to a memorable reception at Vienna’s Hotel Imperial, at which we were introduced to our designated Italian Chief Conductor, whom only a few of us knew. He appeared tall and likeable and, in the first few words of his greeting, addressed us already as colleagues, friends even, and refrained from using the oft-heard cliché uttered by many conductors on such occasions, namely that he would turn this orchestra into a first-rate ensemble.
Our time with Giulini was not very long but most of us enjoyed it. Our highlyesteemed Chief Conductor of the 1970s, who understood how to make such an important and prize-winning recording from this rarely-played Bruckner symphony – what better gift on the occasion of his 100th birthday than a reissue of this record from 1974?