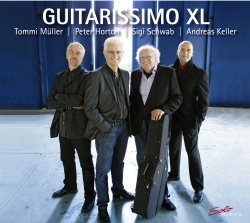 Peter Horton, artistic all-rounder and custodian of the inner fire, has been associated with Sigi Schwab guitar-wise for many years; as guitarist and vocalist, he soon joined forces with Sigi to create the Duo Guitarissimo. The two became a musical legend, inspiring hundreds of thousands of guitarists and lovers of the guitar worldwide with the art and craft of their playing.

Peter Horton, singer, guitarist, composer and writer, stood in Germany, Austria and Switzerland many thousand time on the concert stage and before the TV camera. He made music with world stars from David Bowie to Placido Domingo – nearly in all music directions and released up to 60 recordings and 10 books.

Sigi Schwab, a true Marco Polo in his diligent journeys of discovery across the tonal landscapes of guitar culture, has an internationally unrivalled track record featuring jewels of music with world stars, in studios and on stages at the highest level.