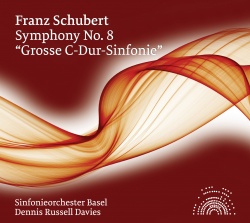 This is the third production on the in 2012 established in-house label of the Sinfonieorchester Basel. The label is maintained worldwide by Solo Musica.

The Sinfonieorchester Basel is one of the oldest and most important orchestras in Switzerland. It is strongly rooted in the north-west of Switzerland and at the same time enjoys a more than regional as well as international radiance. The Sinfonieorchester Basel is always again demonstrating anew its excellent quality, whether it be in its own concert tiers, in the Theater Basel or in guest concerts at home or abroad. Since 2009, the principal conductor has been the renowned American conductor and pianist, Dennis Russell Davies.
Numerous CD productions, some of which received international acclaim and awards, give record of the orchestra’s work. Since a few years ago the Sinfonieorchester Basel has been demonstrating an increasing international presence. In 2010, for example, the orchestra toured around China. It has also played two much accredited for concerts in St. Petersburg and Moscow in fall 2012 and will tour around England in spring 2014.