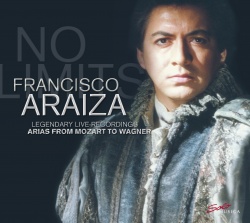 In my opinion, an opera singer has a rightful claim to recognition as an artist only when it can be said that he has personalized the original composition by placing his own stamp on it.

I look back with fondness and warmest appreciation at the moments when the live-recordings which form this collection were created during the period from 1978 to 2007.

The aura of being a Mozart-Tenor accompanied me from the beginning of my career and was a pre-requisite to my eventual crowning achievements as observed in my performance in the roles of Tamino and Belmonte, to entering artistic knighthood as bestowed upon me by Herbert von Karajan and Karl Böhm and finally, to reaching the apex of my career for the celebrity year of Mozart 1991 with highlight performances of Idomeneo and Tito.

I was always clear that my voice would be located in the lyric fach only for a limited time, since the dark colouring of its timbre, the explosiveness of the higher notes and not least its volume were clear early signs that those aspects would become stronger and that I would be advised to go for suitable, heavyweight repertoire. Progressing from the romantic heroes of French opera to the spinto roles of the Italian opera world, I set myself the goal of achieving Lohengrin. Though there were some doubters when I debuted in the role in 1990, it was one of my greatest triumphs. The Swan Knight offered me an opportunity that remains unique in my singing career spanning over forty years – Dimensions thatwereunique. (Francisco Araiza)