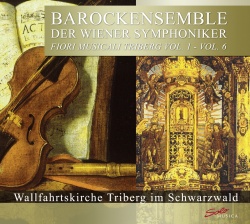 The 1989, Baroque ensemble of the Vienna Symphony Orchestra since then presented a series of concerts with sophisticated Baroque music in the context of the Bregenz Festival includes 13 musicians. These concerts over the years, evolved into a real “audience hit” and continued to the present. This was followed by invitations to the Schubertiade to Schwarzenberg, Fiori Musicali Triberg and other festivals.
The special feature of the ensemble is to combine the style and phrasing of the Baroque with the sonic possibilities of today’s instruments and to develop as a unique sound culture.

The six recordings where produced at the “Pilgrimage Church – “Wallfahrtskirche Maria in der Tanne” at Triberg. The roots of the pilgrimage in Triberg go back to the year 1644. This was the year, where little Barbara Francis was healed by the water of a nearby spring of her eye complaint. Only a year later happened another miracle: the tailor Friedrich Schwab was released of his leprosy, by water of the source.
In gratitude, he placed a small statue of “Mary” into the hollow of a pine tree – hence the name of the church: “Maria in der Tanne”.