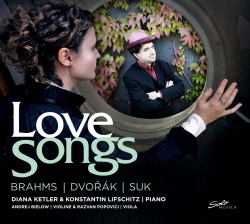 Love Songs is a dialogue about love and its reflections, created by four very close friends, the pianists Diana Ketler and Konstantin Lifschitz, violinist Andrej Bielow and violist Razvan Popovici.
In this programme of some of their favourite Romantic duets the musicians journey through the subliminal passion, bucolic nostalgia and gentle irony of Brahms’ Liebeslieder-Walzer,as well as the intimacy and warmth of his songs Wir Wandelten and Wie Melodien zieht es mir. Then they continue with the exuberant admiration for the universe in Dvorak’s Slavonic Dances, the ecstatic desire of Suk’s Love Song, and, finally, the spiritual adoration of nature in Dvorak’s Silent Woods and In the Spinning Room.
Diana and Konstantin became friends in their student years at the Royal Academy of Music in London. Since then they musical paths crossed many times due to their inner connection, friendship and shared aesthetic interests.
Diana was described by György Ligeti as “a pianist with an unusual musical intelligence”, while the Onaku No Tomo, Tokyo, wrote about her “profoundly lyrical sound and perfectly refined technique”. Her passion for chamber music has led her to found the Ensemble Raro, which the New York Concert Review called “one of the best, most versatile young groups before the public”. She also started the Chiemgauer Musikfrühling Chamber Music Festival in Bavaria, where she is the artistic director. Diana is a Professor of Piano at the Royal Academy of Music in London.
Konstantin is one of the most celebrated performers of his generation. The Frankfurter Allgemeine Zeitung calls him “a phenomenon”. He has an exceptionally vast solo and chamber music repertoire. His many Bach recordings, starting with the legendary Golberg Variations, which the New York Times has called “the most powerful pianistic interpretation since Glen Gould”, continue to fascinate both critics and listeners. Konstantin is a Professor of Piano at the Music Academy in Lucerne.