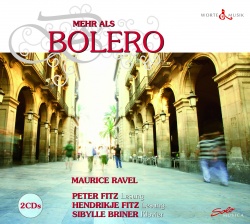 This CD brings us the human Ravel behind the composer, who is often reduced to injustice on the Bolero. Ravels always same answer to the standard question about its masterpiece: „The Bolero naturally. It harms only that he does not contain music “. Maurice Ravel, in the eyes of its contemporaries constantly more a smoking, often sleeplessness and grumpy Dandy, appears to us in the spirit-rich texts Enchenoz `as a puzzling man, with numerous airs, unknown quantities sexuality, alternating phases of high work strength and large indifference and a most strange end of life with only 62 years.

It was highly estimated a celebrated man of its time, despite its strange character, also from its colleagues, although on mutuality was not always based.

Beside Ravel, we hear two pieces of its most important contemporaries: George Gershwin and Claude Debussy.