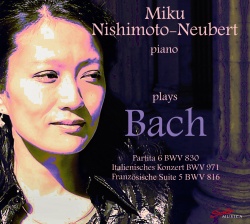 Bach displays a notable awareness of a career success and public acclaim in these, his most important and best loved works for keyboard. Whilst playing down the less popular contrapuntal and melodically orientated elements of the “gallant” style, Back seems to favour a more instrumentally-oriented style of virtuosic writing. It was, after all, Bach’s prerogative to defend and to build on his high reputation as one of Germany’s preeminent keyboard players. The exact date of composition of these works is not known. In light of the works’ salient characteristics, it seems likely that they were collated and prepared for publication in the late 1970s, even though some of the works may have been composed at an earlier date. This coincides with Bach’s taking over of the “Collegium Musicum” in Leipzig in 1729, after which Bach turned increasingly towards instrumental composition.

Miku Nishimoto-Neubert was born in Tokyo, Japan , learned piano from an early age and began her formal studies at the University for Music and Art in Tokyo.

She has received several prizes at international piano competitions, among them 1st prize at the “Concurso Internacional de Musica Cidade do Porto“ in Portugal in 1997 and a finalists` prize at the “Clara Haskil Competition“ in Vevey. She won in 1998 the 3rd prize (no first prize was awarded) at the “Johann Sebasian Bach Competition“ in Leipzig. Miku Nishimoto-Neubert is committed both to solo work with appearances in Germany, Austria, Portugal, Canada and Japan as well as to collaboration with singers and instrumentalists. She appears regularly in Song Recitals with well-known singers, most recently with Nadja Michael, whom she accompanied for her scenic Song Recitals during the “2010 Wiener Festwochen”. Since 2002 she has held a position as piano accompanist at the College of Music.