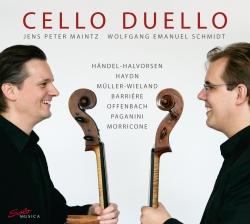 In 2011, Cello Duello will celebrate its 20 years on stage. Jens Peter Maintz and Wolfgang Emanuel Schmidt studied together in the class of Prof. David Geringas in Lübeck, Germany. Finding of necessity, for a marathon concert of a master class by a teacher, a closure piece, machined, the duo of Paganini Moses Fantasy – the birth of Cello Duello!

Cello Duello a highly entertaining and yet artistically demanding concert schedule presents original compositions from the Baroque and early classical works on various highly romantic Cello-virtuosos or mostly cello-playing composers such as David Popper and Jacques Offenbach, to commissioned works about by Jan Müller-Wieland. In addition, own arrangements are a central program content. The remaining three, for example, arrangements of Paganini’s Moses Fantasy and the famous Passacaglia by Handel-Halvorsen for two cellos from the Duello – pen.