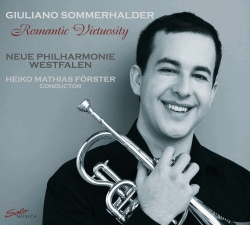 In 1997, at the age of twelve, Giuliano Sommerhalder travelled to Moscow from his mountain village of Astano in Ticino to take part in the International Trumpet Competition of the Tchaikovsky Conservatory. He won it, but set even greater store by the fact that the “living legends” among Russian trumpeters heard him and offered him their friendship. Timofei Dokschitzer, Venyamin Margolin, Yury Usov and others saw in him a potential champion of their great tradition. Late-night discussions around kitchen tables in Moscow caused an ambitious plan to form in the boy’s mind. Now, eleven years later, Giuliano Sommerhalder has realized that ambition, and has recorded the most important and most masterly of the few original trumpet concertos of the late and neo-Romantic eras in their long lost orchestral versions.

All these works (together with three bravura pieces for the cornet) are now being released on CD. With only one exception, they are all world premiere recordings and prove that beyond laborious transcriptions and musical warhorses in the manner of the Carnival of Venice, interesting and extremely virtuosic Romantic original works for the trumpet do exist.
In 1996 the New Philharmonic Orchestra of Westphalia was founded as a merger of two orchestras in the northern Ruhr area: the Westphalian Symphony Orchestra in Recklinghausen and the Philharmonic Orchestra in Gelsenkirchen. From 1997 until 2007 the Austrian conductor Johannes Wildner was the new orchestra’s music director. Since the beginning of the concert season 2007/2008 Heiko Mathias Förster is music director of the New Philharmonic Orchestra of Westphalia.