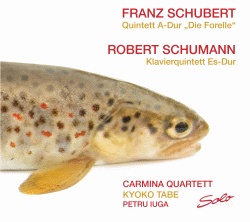 Solo Musica and The Music Agents present this price-crowned album with the renowned Carmina quartet now also finally in Europe.

The Production has won in 2008 the “Academy Award of Japan”, comparably with the American Grammy, in the category chamber music, and the 3rd place of all music sections of the readers and music listeners of the largest music magazine in Japan. Intensity of expression, effortless perfection, and stylistic integrity are the hallmarks of the Carmina Quartet, founded in Switzerland in 1984. Spectacular success in string quartet competitions and headlines in the international press have paved the way for appearances worldwide.

„Destined for greatness“ (Financial Times), the Carmina Quartet is now ranked among the leading quartets of our time. The Quartet has recorded a critically acclaimed series of CDs which have received numerous awards, including a Gramophone Award, Diapason d‘Or, Choc, Deutsche Schallplatten Preis, and a nomination for a Grammy. One of Japan‘s most respected international pianists, Kyoko Tabe‘s thrilling performances in concert and on disc have brought her immense popularity with audiences and critics, making her one of Japan‘s most sought after pianists today.