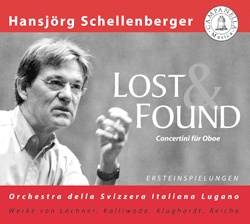 Lost & Found means stumbling across music by pure chance, fortuitous circumstances and sometimes after a long and arduous search; music composed a long time ago, in most cases performed then and since lost in the mists of time.

The nineteenth century plays a central role in all this, since the oboe as a solo instrument had by that time been relegated to a wallflower existence and was only perceived by the music-loving public as part of the overall orchestral timbre. If Robert Schumann had not written his famous Romances op. 94, there would have not been a single composer of reputation in the Romantic era to have written anything for the oboe.

We hope that these recordings will bear witness to the treasures to be found when such a journey of discovery leads to the production of a whole CD, especially since the nineteenth century produced such a cornucopia of music, including that of some outstanding composers of the second and third rank.

On this Record you are discovering first recordings by: